This was definitely one of my favorite projects in the past few months. Director Seth Hagenstein had pitched an awesome script to ICED Media that was picked up and given a green light. The story is a simple one: Two bottles of nail polish that fall in love in the nail bottle factory, but are dramatically separated. One bottle is flown to Paris, and the other is flown to California. It appears the bottles will never see each other again until both bottles are chosen and applied by two different women, who both fly to New York for fashion week sit next to each other at a fashion show. They turn out to be best friends and hold hands, rejoicing the nail polish.

This script encompassed a few challenges that would take a bit of pre-production to get an idea of how we can make things possible the day of shooting. Broken down, there are only a few locations that we will be shooting:

Out of these four groups of locations, the "Essie bottle factory" and the "NY Fashion Show" were where most of my attention went to initially for pre-production. The NYC exteriors and hotel interiors would of need some love in the near future, but they didn't require as much time considering they didn't have to be built from the ground up like the others.  I got straight to work on designing a test for the factory.

Seth had given myself and Art Director, Nicole Eure some references, including a behind the scenes for a spectacular short film titled "The Last 3 Minutes," shot by Shane Hurlbut. The look Seth was looking for became clear - a white/clean environment with moving bokeh in the background to simulate factory movement. After building a factory out of styrofoam bricks, Christmas lights, plastic cardboard and a slider, this was my result: 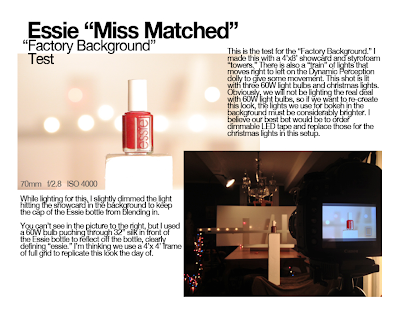 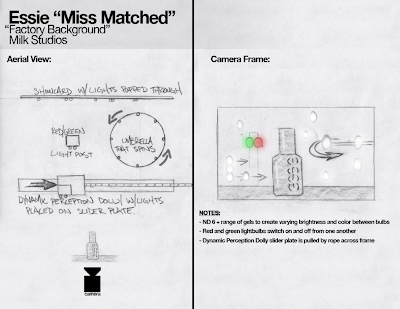 You can also check out the video I recorded of this test here: https://www.youtube.com/watch?v=t9J8iptCNBQ

As you can see from the test, the bokeh look is important in these shots. It took some time shopping at home depot to gather supplies to make "bokeh lights" bright enough to use in the background. I ended up piecing together three strips of lamp wire with 60W incandescent bulbs with tabletop dimmers to replicate the Christmas lights from the test. 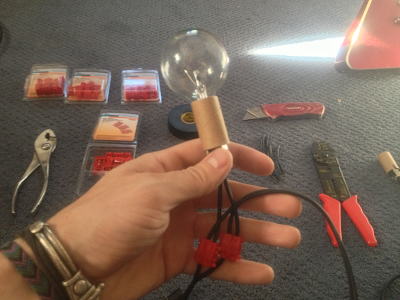 For the fashion show segment, I sketched out a lighting setup that seemed to best suit the coverage we would be capturing the day of. As you can see, we only set up one side of what a traditional runway would be. This is because most of our coverage was close-ups and didn't call for a bigger setup. 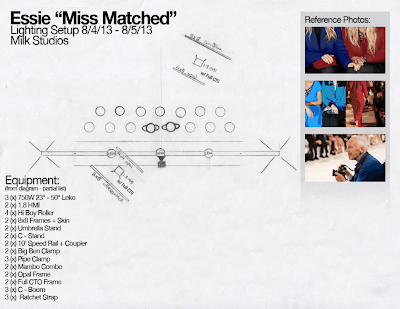 The art department did an incredible job building the conveyor belts for the Essie bottles to travel on, as well as other trinkets to simulate the processes of an actual nail polish factory These designs included a way to have the bottles caps drilled on, and for the bottles to systematically be pushed onto a lazy-susan type machine.

One lighting note I made a conscious effort to stay on top of during the shooting of this commercial was to give the nails a sheen, similar to how you would strive to bring eye light to your character in most situations. The only difference with eye light vs. giving nails a sheen is that the nails (and/or light) have to be at a very particular angle to reflect - opposed to an eye where you have nearly 180° to play with. This sheen was as easy as flying a pizza box reflector in, or even a 2' x 4 bank kino (although I prefer the reflector). Also, when shooting a nail polish bottle, treat it the same way you would any reflective surface object (cars, beer bottle, bowling ball, etc). You run the risk of having your entire environment reflected on your object, whether it be film equipment, crew members, or the ceiling. Enclose your object with showcard, duvatine, or anything you find suiting. Find a studio with a cyc wall that is large enough to cover your peripherals. If you're using diffusion, make sure it's seamless to avoid reflecting unwanted lines on the product you are trying to sell. 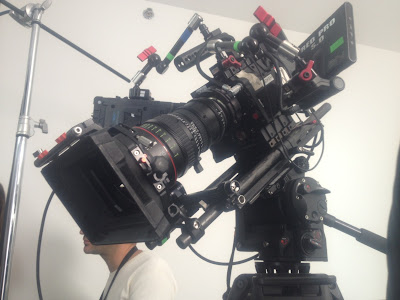 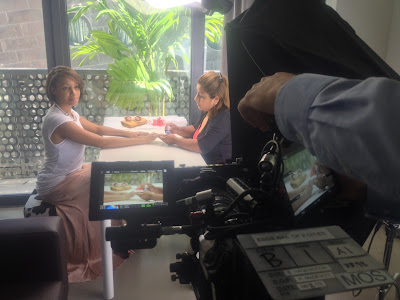 Posted by Patrick McDevitt at 11:02 PM No comments: