Where do I begin with this one? It's hard to recount all the amazing things that was experienced on this trip. It will certainly be hard to top a shoot like this in the years to come.

This two week expedition all started with the love Seth Hagenstein and I share for EDM (electronic dance music). We set off to shoot a music video for an EDM artist, but didn't know who, or how we would get in touch with them. It wasn't even a week later I ran into a good friend of mine Annie Rinsky who I see time to time working at webster hall. She is the co-founder of the ever popular "BASSment Saturdays", a weekly saturday night event at Webster Hall that promises a full house and energy fueled night of electronic music. I knew she was the person to talk to, and when I told her about the project Seth and I were pursuing, she immediately got on the case. It wasn't even a week later Annie hooked us up with Jake Udell, the manager for Tristam, a young and upcoming artist. Tristam has acquired millions of hits on tracks you can find on youtube, and was discovered by Jake Udell - who is also the manager of Krewella.

Seth put three treatments together for the music video to present to Jake. Two of these treatments would have most likely been shot entirely in New York, and one would take place along the west coast though deserts, mountains and forests. After having the treatments looked over, Tristam and Jake sided on the west coast treatment - which I could not be more happy about.

I had traveled the west coast a year prior to this music video with one of my best friends Kathryn Palmieri. Kathryn is also a photographer, so we were always on the same page when it came to finding visually incredible locations. We flew into Albuquerque, New Mexico (home of Walter White and family) and drove up the coast to Portland, Oregon hitting national parks and Navajo reservations the whole way. I learned a lot along this trip regarding film/photo permits, how accessible certain locations can be and how to get to them. It is easy to lose a few hours looking for the salt flats in Death Valley or Antelope Canyon in Arizona. We even went to the Redwood Forest in San Francisco looking for the huge iconic redwood trees, only to find incredibly tall skinny trees. We then found that there are two types of redwood trees - the sequoia sempervirens and the sequiadendron giganteum. We went to see the sequoia sempervirens…

During our trip out there, a lot of our time was spent doing time-lapses. It was only recently before this trip I acquired a time-lapse dolly manufactured by Dynamic Perception. If Kathryn and I saw a great spot for photo, we would stop and hang there for an hour or two, which gave me enough time to set the dolly up and program it to capture a time-lapse.

I didn't realize at the time, but having this time-lapse dolly with us the entire trip was good preparation for the Tristam music video. Now I had an idea of how difficult it could be hiking out to certain locations with equipment and how long it could take. I found how frequently storms roll through the west coast and how to deal with them in the middle of a time-lapse, and how to estimate how long it will take before getting caught in the middle of one. Traveling the west coast is one of the most beautiful trips I've ever been on - being prepared for what mother nature can throw at you will make it even better. 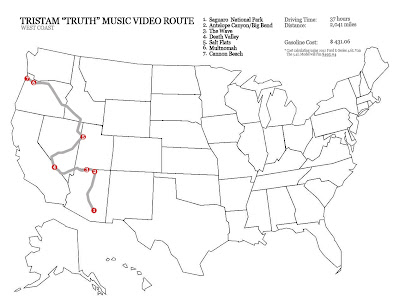 The story Seth had written consisted of two girls chasing each other though doorways through surreal locations. If the girls run though a door on the salt flats in Utah, they might pop out on a beach in Washington. This idea called for a moderate amount of VFX work. Making the "passage" to the next location seem believable. Throughout the story, we had a handful of transitions that required a lot of attention when shooting. Making sure that horizon lines matched, the camera height, distance and pan/tilt angle were the exact same, along with F stop, ISO, focal length and making sure the girls were walking or running the same way through this transition. What made this task a challenge is that these transitions took a few day to complete. We might shoot one half of the transition in Woodstock, NY (our first day of shooting before flying to Oregon), but won't complete it for over a week until we arrive in Arizona. Inevitably, things are forgotten, and notes along with screen shots are crucial to keep you from ripping your hair out in post.

A lot of what you experience along a road trip such as this one has a lot to do with who you are traveling with. Being honest, I couldn't have asked for a better group of people to travel with. Seth had brought on Austin Dill as producer, who always has energy and a great sense of humor. The two stars of the video, Ali Donahue and Deana Sophia were incredible. Sticking it through in freezing weather dressed in practically nothing, running crazy lengths, and overall having incredible ambition during the entire shoot. I can't image how this shoot would have gone if even one of us was missing from this group. I'm glad we became such a strong team, and ultimately became even better friends. 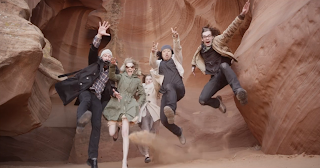 Posted by Patrick McDevitt at 6:39 PM